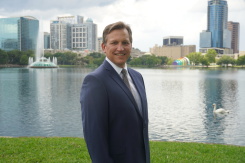 Dr. Derek Slosser was raised in Satellite Beach, Florida.  He earned a B.S. degree from University of Florida in 1987.  He spent five years in corporate sales.  In 1993, he began dental school at The Medical University of South Carolina.  In 1995, he was awarded a two year Health Professions Scholarship with the U.S. Army.  In 1997, Dr. Slosser was awarded his doctor of dental medicine degree from The Medical University of South Carolina.  After dental school, he entered the U.S. Army and completed a one year General Practice Residency at Fort Lewis, WA.

Dr. Slosser spent the next three years at Walter Reed Army Medical Center in Washington DC as a general dental officer.  In 2003 he completed his endodontic post-graduate training at University of Maryland Baltimore.  Dr. Slosser worked in a private endodontic practice in Baltimore, Maryland from 2003 – 2007.  In 2007, he relocated to Orlando and joined Central Florida Endodontics. Dr. Slosser taught in the Endodontic Department at University of Maryland Baltimore for 2 years. He was involved with the Maryland Special Olympics.  He is a member of the American Association of Endodontists.  His outside interests include: jogging, fishing, and tennis.